Introduction to Beer Can Types

Beer cans can be divided into 3 basic categories: 1.) Flat Tops, 2.) Cone Tops, and 3.) Self-Opening. Each of these categories have subcategories. 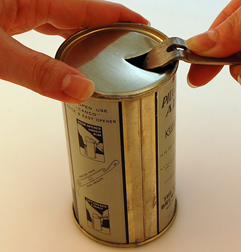 Flat Top beer cans basically are metal cylinders with two flat, one-piece, solid lids, one on the top and one on the bottom. Flats tops pre-date tab tops, have no built in mechanism for opening the can, and had to be punched open with a churchkey opener. The photo to the left demonstrates how a flat top would be opened with a church-key opener (this rare, about mint Pilgrim Ale flat top is the best known example and is in the author's collection). The most common size flat tops held 12 ounces and were just shy of 5" tall and 2 5/8" in diameter. 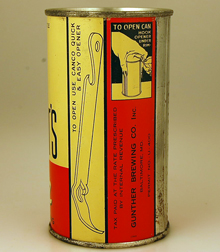 The earlier flat tops usually included text and pictorial instructions on how to open the can with the opener. This type of flat top is referred to as an "Instructional" or "OI" (abbreviation for Opening Instructions). These cans included written instructions as well as pictures of openers and/or openers-in-hand punching open a can. As a rule of thumb, the opening instruction pictures became smaller (and, eventually, were removed) as time passed and as consumers got the hang of opening cans. 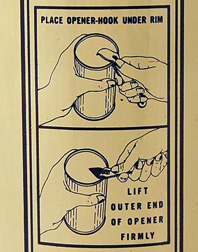 To the left is a photo of an instructional panel on a later flat top. Notice there no longer is a separate churckey featured, just the tiny one shown piercing the lid.

This photo was taken from the very rare, mid-1940s Old Dutch Superior Pilsner Beer instructional sold at Breweriana.com in August, 2008.

Some collectors also think of flat tops as being either "IRTP" or "Non-IRTP." A statement like "Internal Revenue Tax Paid" was required by Federal law to appear on alcohol containers between June, 1935 and March, 1950.

Some of the later flat tops around 1960 had aluminum, rather than steel, tops. These aluminum topped cans usually are referred to as "Soft Tops."

Any can with a cone or funnel shaped spout (like modern brake fluid containers) is called a "cone top." Most of these cans are 12oz and made of 3 pieces (the body, the cone-shaped top, and a flat or concave bottom). 32oz cone tops also were made and collectors refer to them as "quarts." "Crowntainers" are a type of cone top made of two pieces, being smooth from the bottom rim to top and having no seam. Cone tops were manufactured with different types of spouts and bottoms and these variations are discussed below. Cone tops were sealed with a removable crown on top. 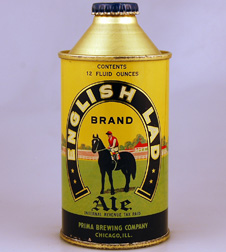 As the name implies, high profile (HP) cone tops are cone tops with a tall spout. Notice the high cone to can-body height ratio and also notice the spout is smooth all around without any ribs. High profile cones are about 5 5/8" tall and about 2 5/8" in diameter at rims.

The English Lad Ale cone top to the right is thought to be the best known, all original example of this can and was sold at Breweriana.com in late 2007. 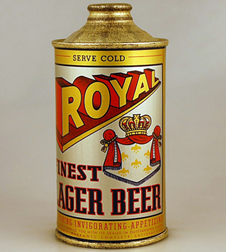 The Royal Finest Lager Beer featured to the left is a raised rib low profile cone top. It is the only example of this can currently known to exist and also is in near mint condition. This can was sold at Breweriana.com in late 2007. 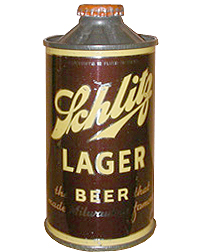 This is the type of low profile cone top with inverted ribs on the spout and a flat bottom. Dating back to late 1935, this was the first type of cone top and it was produced by the Continental Can Co. FBIR cones are about 5 3/8" tall and about 2 5/8" in diameter at rims.

This deep, metallic burgundy Schlitz Lager on the right is the rarest FBIR, it's the only one known to exist. It was sold at Breweriana.com in March of 2007. 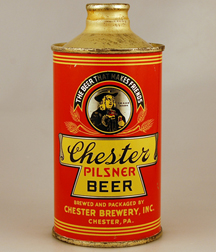 This type of cone top was produced by Crown Cork & Seal Co. from 1937 through the early 1940s. The spout is taller like a high profile cone but it graduates to a wider diameter at a point almost half way down from top to bottom. J-Spout cone tops are about 5 9/16" tall and 2 5/8" in diameter at rims.

The example to the left is of a Chester J-Spout. There likely are no better known examples of this can which was acquired by Breweriana.com in late 2007. 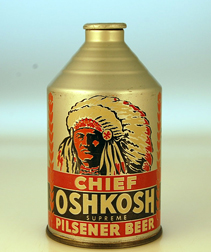 The crowntainer is the cone top most different from other types of cones. They were invented by Amos and Edgar Calleson and manufactured by Crown Cork & Seal from late 1939 through the mid-1950s. The cans were made of just two pieces, a seamless, continuous body and spout and a concave bottom. Notice there is no protruding rim where the cone meets the body as with the other types of cones. The inner vessel was formed with steel and then wrapped with aluminum on the exterior. Many crowntainers have this silvery aluminum color, hence the nick-name "Silver Growler" for crowntainers. Crowntainers are about 5 1/8" tall and about 2 7/8" in diameter at rims.

The Chief Oshkosh Supreme Pilsener Beer crowntainer featured to the right is near mint, graphically appealing, hard to find, and, as of the writing of this article, available for sale or trade at Breweriana.com. 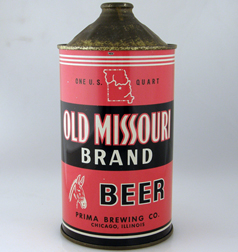 This Old Missouri Brand Beer quart to the left is a wonderfully designed can that sold on Breweriana.com in August, 2008. 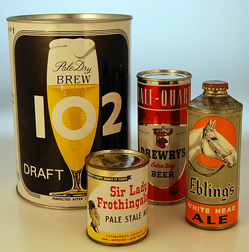 Cone tops, flat tops and tab tops were produced in a variety of shapes and sizes. The most common size container was 12oz. Any cans of a size other than 12oz (or a 12oz can that is shaped different than usual like the Ebing's to right) is referred to as "Odd Size." It's not all that witty, but cans smaller than 12oz are generally called "small" cans, 32oz cans are called "quarts," and gallon sized cans are called "gallons." 16oz size cans often are referred to as "pints." 8oz flat tops are about 3 3/8" tall and 2 5/8" in diameter, 16oz cans are about 6.25" tall and 2 5/8" in diameter and gallon cans are just under 9" tall and a little over 6" in diameter.

The photo to the right shows an assortmen of cans that would be classified as "Odd Size." The Ebling White Head Ale is believed to be the best known example and is in the author's collection. 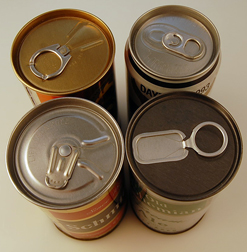 Self-opening cans have some type of a mechanism built into the top lid of the can to enable consumers to open the container without the use of any tools. Self-opening cans first had a removable tab that would be pulled off and discarded. The first such cans, called "zip tops" had a flat tab attached to a pull-off, perforated piece of the top. The tab acted as a lever to break the seal and then tear off the removable piece, thereby exposing the hole through which the beer could exit the can. The first zip tops had a sharp, flat tab that often cut the consumer's finger. Later zip tops had smoother, rounder edges to reduce the incidents of finger cutting (see example of rare E&B Schmidt's zip top at bottom left of photo to left). Later yet the pull ring was introduced (see example at top left) which solved the finger cutting problem but did nothing for the pollution/environmental problem caused by these disposable pulls. The lid type at bottom right is called a "juice tab" or "juice top." Eventually, self-opening cans like the ones we use today were made with a non-detacable mechanism on top for opening the can (see such a "sta-tab" can at top right).