How to Date Cans

How to Determine the Date Beer Cans Were Produced

In a few rare cases, brewers stamped the actual date of production on beer cans (some Rainer cans and other Western brewers did this). Unfortunately, the majority of beer cans are not dated so it takes a little digging around to establish the approximate date. Below we show how to narrow down the age of beer cans, by (A) surveying the big picture-more obvious considerations, (B) reviewing relevant publications, (C) delving into the can manufacturer's logos and codes, and, finally, (D) walking through an example.

First check out the obvious features and characteristics of the beer can:

A statement like "Internal Revenue Tax Paid" was required to appear on beer cans from June 01, 1935 through March 30, 1950. A few cans were filled prior to June 01, 1935 (like the very rare pre-tax Kreuger Ale & Beer set acquired by Breweriana.com in January, 2007). However, it is overwhelmingly likely that the appearance of the tax statement places the can between 1935 and 1950 and the lack of such a statement places the can after March 30, 1950. US beer cans exported oversees during World War II had a statement like "Withdrawn Free of Internal Revenue Tax for Exportation."

Older cans (1935 to mid-1940s) were made of a thicker gauge steel. As time passed and manufacturing processes improved, the gauge and weight of cans decreased. Cans were made (mostly) of steel from 1935 through about 1980. With many exceptions, steel cans generally date between 1935 and 1980 and aluminum cans date after 1980.

When beer in cans was first introduced, the public had to be sold on the benefits of beer in cans. Early (mostly 1930s) cans have extensive text on a back side extolling the virtues of cans as a vessel for beer. Consumers also had to be educated on how to open the early flat tops so earlier (mostly from 1935 through about 1950) flat top cans had instructions on how to open the cans on the back. The first such "instructionals" often featured a picture of a churchkey opener that vertically spanned from the top to the bottom of the can. Since beer in cans was new, breweries also opted to display the type of beer in very prominent (sometimes more prominent than the brand of beer) letters. Early cans tend to have "Ale," "Beer," "Bock," or "Lager" in very large letters. Early flat tops often displayed a "Cool Before Serving" line on the front of the can or "Keglined" on the front of the can.

4. Dating by Types of Cans

For an explanation of the types of beer cans below, see "Types of Beer Cans."

Publications can be helpful in establishing the date of cans:

"Beer Can Collector's Bible": by Jack Martells has photographs and approximate dates of thousands of beer cans.

"Who's Who in Brew": this is a listing of all known brands of American beer and their approximate dates of production from 1933 through 1978. The author acknowledges that the dates are as accurate as possible but can be off by years in some cases.

Other: Old magazines and newspapers feature beer ads which display cans. Brewers Journals are an excellent resource. Back-issues of the BCCA's magazines have a wealth of information.

C. Fine Tuning Dates by Can Manufacturer Logos and Codes

American Can Co. cans are easily spotted by their "Keglined" trademark. The Keglined trademark was followed by patent information which changed over the years. We can narrow the date the can was produced by interpreting this patent information as follows:

For many American Can Company cans, the text of "AM. CAN CO" will be printed conspicuoulsly, along with a small text code, in this order:

The two digit number before the "A" represents a code of where the beer can sheet was physically printed...summarized in table directly below:

The next part of the symbol always is an "A". For example, "17 A", or sometimes with a dash, "17-A". This "A" could be another indication of "American" but this is not known for certain.

The final small symbol after the "A" indicates the calendar year in which the beer can sheet was produced. The actual symbols printed on the beer cans are very small and are difficult to capture even with a quality camera. The following symbols are illustrations of the actual printed canning code symbols.

Interpreting the MPC is a lot easier than it may appear (see the example below).

Early 1940s and Earlier: "Crown Can" appeared on flat tops.

1950s and later: "National" appeared in an outline of the US.

D. An Example: Dating an Edel Brau Ale Can 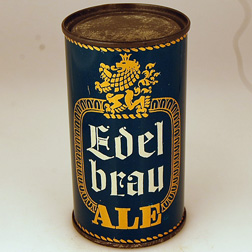 To date this Edel Brau Ale can, let's first look at the big picture. At first glance, we see that it is a flat top so we know it dates to somewhere between 1935 and 1970. When holding this can in hand, one can tell the steel is a thick, heavy guage. The heavy steel, in conjunction with "Ale" in large letters, makes it clear this can falls in the earlier part of the above range, certainly pre-1950. 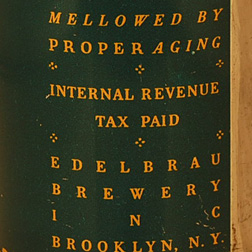 These clues are validated by the "Internal Revenue Tax Paid" statement on the back side of the can (see image to right). This statement confirms the can is from between 1935 and 1950.

Next, let's review some publications. Looking up this brewery in "American Breweries II" by its exact name, city and state reveals that the brewery operated under this name from 1937 through 1945. According to "Who's Who in Brew," Edel Brau Ale" by the "Edel Brau Brewery Co." dates between 1940 and 1946. Since the brewery name is not exactly correct (appears as "Inc." on can, not "Co."), we can not conclude with certainty this date range is accurate but it's evidence we can factor in along with other considerations. This can does not appear in "The Beer Can Collector's Bible." Given the rarity of this can, it likely was not known to exist at the time of the Bible's publication. 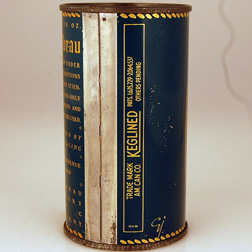 So far, all the clues line up nicely so we can say with confidence the can dates somewhere between 1937 and 1945. Next, let's take a look at the can manufacturer's patent info and code to attempt to further narrow down the date. 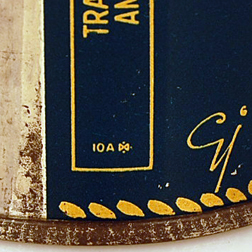 Since this is an American Can Co. can, we can look up the MPC in the tables above. Take a look at the MPC to the right. The 10 indicates the sheet for this can was produced in Greenwich, Connecticut. The bowtie with two dots dates the can to 1939. So, we know the sheet for the can was manufactured in 1939. Does this necessarily contradict the "Who's Who in Brew" estimate of 1940 to 1946? Not necessarily. It's safe to conclude that this can was manufactured around 1939 and likely was filled/distributed around 1940.

So, we've taken the process as far as we can and we can conclude this can most likely hit the shelves shortly before the US entered WWII.

We would appreciate hearing from anyone who would like to add to this section about dating cans. A more detailed analysis of the canning companies other than American would be an interesting addition to this discussion.

The American Can Co. MPC code research for this article was performed by Bob Porter and Kevin Lilek. Randy Karasek created the MPC illustrations above. Thanks Kevin, Bob and Randy!