How much is a Billy Beer can worth?

Text at the top of the can reads "Brewed expressly for and with the personal approval of one of America's all-time great beer drinkers -- Billy Carter."  Toward the bottom, above Billy's signature is the claim "I had this beer brewed up just for me.  I think it's the best I ever tasted.  And I've tasted a lot.  I think you'll like it too." 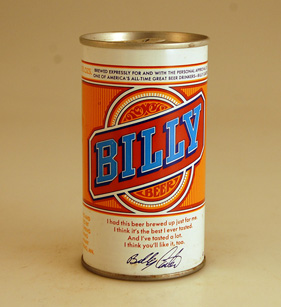 Reports have it that the beer actually tasted lousy.

Even though over two billion cans of Billy Beer were produced, there was a frenzy for them by beer can collectors and every would-be entrepreneur.  At the time, it seemed to be an accepted pop-culture norm that Billy Beer cans were valuable.

Well, it turned out to be not the case.  On a good day, if you can find a willing buyer, it might fetch a dollar.