Beginning Wednesday, September 15, Breweriana.com will be unavailable for an undetermined amount of time. Email to addresses in the Breweriana.com domain may also be affected. Please contact us using this link until the site and email are back online. Thank you for your continued patronage and patience during this downtime!

The Breweriana.com and Morean Auctions team

Some lithographs are striking and bold, this one is just plain gorgeous. The portrayal of the little girl, wearing a pale blue dress with a large pink bow in front and with light blue shadowing surrounding her perfectly compliments her angelic expression. Although it may not be an image typically associated with beer, it is a beautiful advertisement.

The condition of this Texas lithograph is outstanding with no significant flaws. It has been professionally cleaned and conserved by Joel Oppenheimer, Inc. The frame is original and is itself a work of art, with very detailed gesso and colors that provide a darker brown at the border of the image, lightening to beige at the edges of the frame.

The American Brewing Association was founded by Adolphus Busch in Houston, Texas and operated between 1893 and 1918. The first product was introduced in 1894 and in 1897 a brewery advertisement featured two brands of beer – “Dixie Pale” and “Hackerbrau” with the cost stated to be $1.00 for 12 pint bottles.

In terms of rarity, while several partial or off-grade examples have surfaced, no other examples are known to us in similar condition with the original frame. 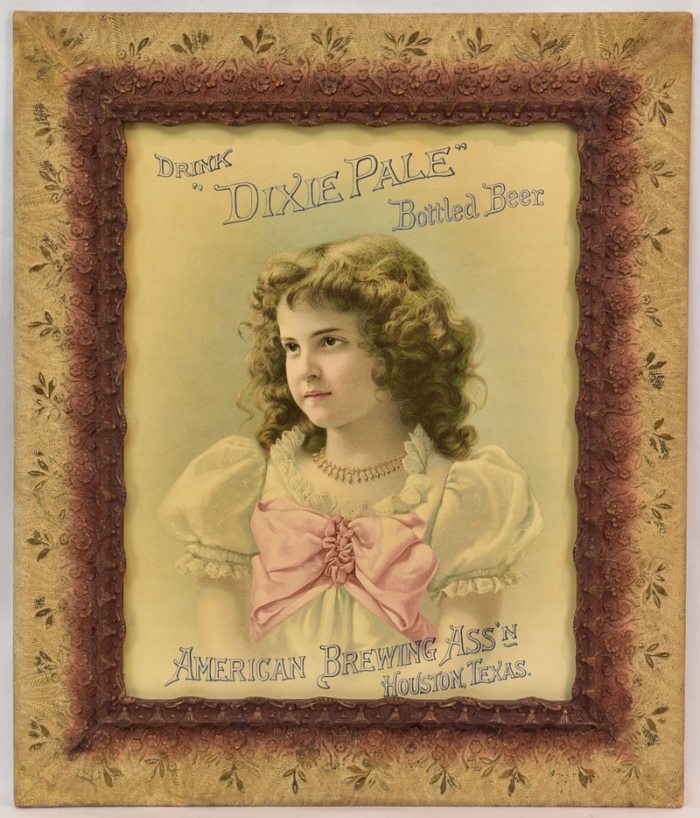