New England collectors know well that quality Narragansett items are highly desirable but rarely become available. The universal appeal of Narragansett items is a result of unprecedented elegance of design, most frequently represented by the long, flowing, curved, well-proportioned and balanced Narragansett letters on a backdrop of handsome reds, hunter greens, gold and copper colors. Some of the Narragansett artwork was developed by Dr. Seuss (Theodore Geisel), a Dartmouth roommate and buddy of Haffenreffer, one of the former Narragansett brewery presidents. I can think of no other brewery whose beer can and beer advertising designs are more graceful. 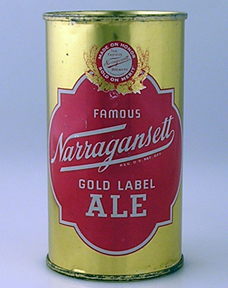 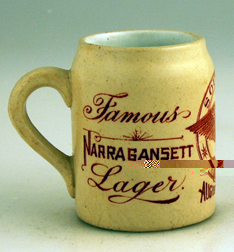 Rick Poore is a good friend of mine. He was a leading dumper in the early years of the hobby who had finds such as the very respectable Narragansett Light flats (that had been previously unknown), an Arbee cone, a White Cap cone, Stroud Ale, the Pabst Bocks flats and an Indian Queen cone. The Pabst Bocks and the Indian Queen were such clean dumpers they could be graded a 1 or better. He also turned up many wonderful indoor cans, including the the Stock Ale by Croft flat top (that had been previously unknown), the 17 Old Oxhead Ale crowtainers (only 1 was known prior to this find), Ruppert Ale cans, a minty Germantown, a minty Feigenspan Bock, and many other great cans. 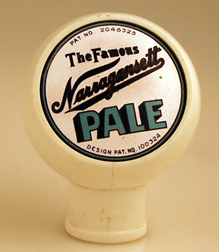 Enjoy browsing the Narragansett items hitting the pages of Breweriana.com this week.